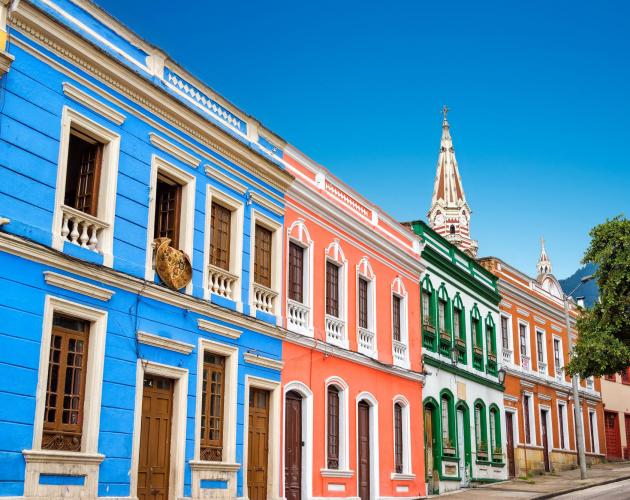 Flights on sale to Bogotá starting at only $487 R/T from Montreal.

Bogotá is the capital city of Colombia. With a population of about 8.8 million people, Bogotá sits approximately 8,660 feet (2640 m) above sea level in the Colombian Andes region. Orientation is relatively easy, as the mountains to the east are generally visible from most parts of the city. To understand the sheer size of the city, consider that Mexico City and New York City are the only North American cities larger than Bogotá.

In fact, in 2008 the World Cities Study Group and Network (GaWC) from the United Kingdom ranked Bogotá as a world city comparable to San Francisco, Washington DC, Dubai, Buenos Aires or Berlin, grouped by their economical, political and cultural developments. What this means for the traveler is a world class urban destination. Bogotá is a city of contrasts, and as such it offers a unique experience to its visitors. Prepare to find a hectic balance between the new and the old; the peaceful and the frantic. Encounter century-old plazas and churches shadowed by towering skycrapers. Find peaceful treelined bicycle routes cut through by wild-traffic avenues.

Bogotá is a city with many layers. From internationally recognized universities to regional offices for multinational companies, Bogotá is Colombia's capital for official business dealings. It is a city that caters to a population that has been exposed to European and North American influences, which ensures that anything from traditional dishes (Ajiaco) to sushi or fast food restaurants can be found. It's one of the most modern and metropolitan cities of South, Central America and the world.

Bogotá is divided by 4 sections: The South which is mainly the poorer section of the city; El Centro, which translates "Center", is the city's original Downtown and hosts most of its traditional heritage locations, city and public offices, and financial headquarters. El Occidente, which is home to Bogotá's major sporting venues and outdoor parks, as well as residence areas for main middle and some upper class living; and The North which is where most modern development has taken place, and combines many upscale living spaces with affluent shopping centres, boutiques, cafés, nightclubs, and many new business neighbourhoods offering headquarters to many multinational corporations.

During the last decades, due to the city's exponential growth, some of neighboring towns have been absorbed and are now considered within the metropolitan area of Greater Bogotá, like Suba, Soacha and Fontibón.